Every society has perception gaps. In America, one large perception gap exists around what to worry about. Terrorism is the focus of many news items and organizations’ budgets. In an average year, terrorists kill about 16 Americans. Billions (or trillions) are spent as a result. To put that in perspective, more people die from toddlers with guns (21) with far less of a response. Lightning is slightly worse (31), but at least we’re warned by the weather service about that. Lawnmowers, buses, and beds add up to a little over a thousand (~1,050), and hardly anything is said or done. Far greater than all of them are Americans dying from guns fired by Americans (11,737). If budgets were proportionally allocated, entire bureaucracies would be reorganized. That re-apportionment is unlikely until the perception gap is resolved, another task that is similarly under-emphasized and under-funded. 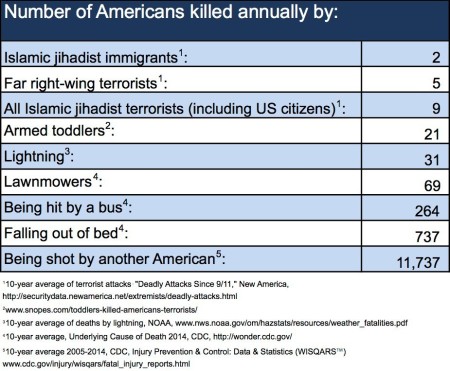 2 thoughts on “US Gun Perception Gap”