A study of data from disasters between 1920 and 2010 documents the effect of disasters on poverty. Basically, a major disaster increases poverty by about one percent. Those who can afford to move, do so. Those who can’t afford to move, don’t. The impact is an increase in poverty. Some areas experience multiple disasters: hurricane regions, tornado alleys, and earthquake zones. An unintended consequence of federal relief has been to heighten the migration. Some federal funds are available to people regardless of whether they stay in the region or not. This allows people who are at least relatively affluent to move to safer regions, again heightening the concentration of the poor. In effect, rich people move to richer regions and the money moves with them, poor people who can’t move remain in regions that have less money and therefore become poorer. The frequent comment of “why do people live in such areas?” may be a result of those people being unable to move, even if they want to. 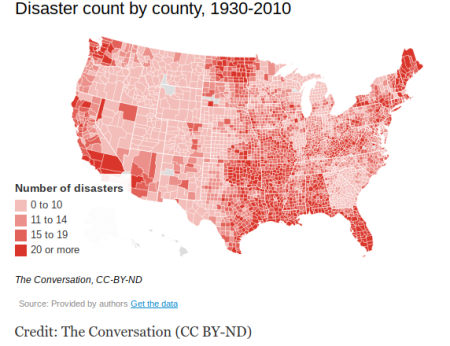 One thought on “Disasters Increase Inequality”