Add all of the sea ice in the Arctic and the Antarctic and get a number that varies with the seasons, but less so because when one pole in winter the other is in summer. It was bad enough when the total continued to decrease. The decrease was somewhat chaotic, which is typical of natural systems, but it looks like the old system has broken into a new pattern. Within the last two months, we’ve lost about two million square kilometers of sea ice. That’s the about the same decrease from the previous 37 years. Thirty seven years of degradation in only two months. While some noise is expected, no deviation has been this large or persistent. Also, while there are great concerns about average global temperatures rising 2 C, about 3.8 F, the North Pole is currently 36 F above average, almost ten times greater. Warming, melting, the world is changing and the change is accelerating – and it looks like it is starting at the top. 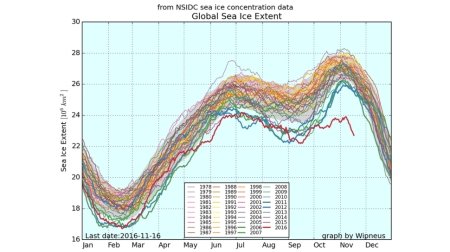 One thought on “Polar Ice Breaks Into New Trend”