A previous post chronicled the sudden rise in unemployment in the US from a previous record ~600,000 to over 3,200,000. At that time (March 26, 2020) unemployment was predicted to reach 30%. It has already reached 17%, a massive jump from the 3.5% unemployment in February. As large as the five-fold jump in unemployment was about a week ago, unemployment has now doubled to 6,600,000. Because so many states were slow to react to the crisis, the health and economic impacts are expected to worsen for months. Some good news is hinted at as some of the states that responded early may be witnessing slower rates of infection, but the situation is so dynamic and significant that restrictions may be extended rather than reversed. Don’t be surprised to find that a new record is announced next week. 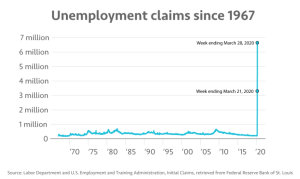