Phytoplankton blooms are relatively common, but not in the Arctic, until now. The Arctic Ocean couldn’t support them because sea ice blocked the water and the sunshine. Now, plankton blooms are spreading north at about 1 degree per decade. The Arctic Ocean has seen dramatically quicker responses to global climate change. Many of those changes have precedence, which makes it easier to extrapolate to estimate short-term impacts. New phenomena, like phytoplankton blooms, challenge assumptions and could revise systemic forecasts. Unfortunately, the chaotic nature of Nature, and the lack of similar scenarios make it difficult to understand the implications. For now, one of the most obvious implications is that the food chain will be affected first, whether by using up existing nutrients or by supplying additional food. Climate change isn’t just about raising temperatures. It’s already affecting life in places that were considered remote and pristine. 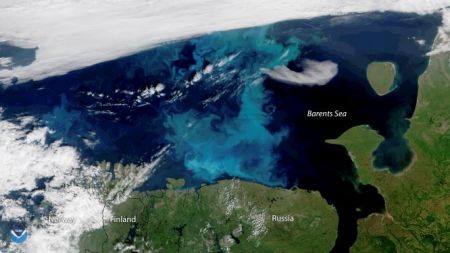