China’s economy has been growing incredibly. While the rest of the world is experiencing GDP growth of about 2% to 3%, China has been growing in excess of 6%. Much of the growth is real as the largest country rapidly switches from rural to futuristic urban within a generation. Some have questioned the growth because some of it seems to be infrastructure that was built but not used, because debt seems to be playing a larger role, and because the numbers seem to be too good to be true. That may just be envy, but there may also be some truth to their doubts. China is secretive about the analyses behind their economic reports. That’s true at the national level, and evidently at the local level. One key steel-producing province, Liaoning, has been falsely reporting the numbers their bosses wanted to hear rather than the real growth rates – until now when the disparity has become too large to ignore. Instead of growing near the national average of 6.7%, they’ve actually been falling, ~ -2%. The revelation is troubling because steel production is an indication of construction and construction is an indication of real growth. If China’s real economic figures are less attractive than the reported figures, the local and global financial markets may treat the uncertainty with a retreat, as they normally do. 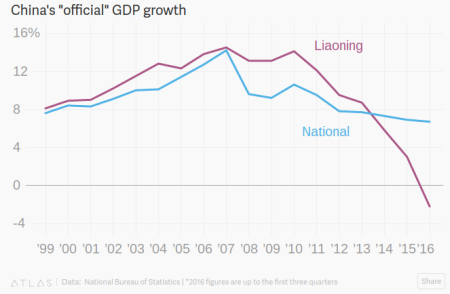 One thought on “Doubting Chinese Economy”