The following conclusion may not surprise you, but the way they reached it may.

“SOCIETY could collapse at some point in the 2020s as political turmoil sweeps the Western world.”

While many feel that way for a variety of reasons, this conclusion is the result of an analysis of multiple trends based on methods derived from studying historical and historic collapses. One surprise for many may be that this analysis is true regardless of who won the US Presidential election. The key influence is the rise in inequality. Historically, a bifurcation in society leads to a majority who are disaffected and disgruntled while an ever shrinking minority accumulate power. Within that minority, individualism dominates, cooperation declines, and divisions within the elites begin to degrade power structures and institutions. We appear to be following a path that others have followed that usually doesn’t end well. The first significant collapse is expected to be the US, which will trigger collapses in Europe. It is possible to avert such a scenario, but systemic changes are required – soon. 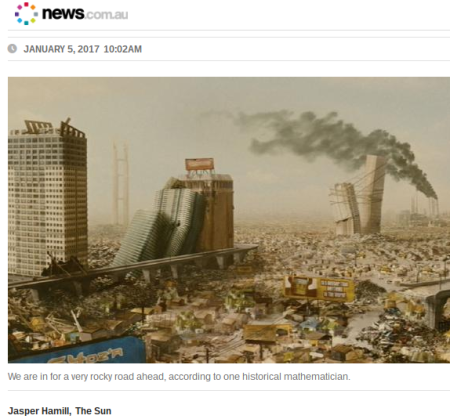 “Society Could Collapse Within A Decade, ‘Mathematical Historian’ Predicts” – news.com.au