A common news item for the last several years, US jobs are up, unemployment is down, wages are up – all with caveats, of course. Jobs were up 178,000, yet another month that added as many jobs as a small city. Unemployment is down to 4.6%, the best in eight years. Wages were down by $0.03, but that was after a $0.10 rise in the previous month. The issue of slow wage growth continues to be the main concern for deciding whether the economy has recovered or not. While more people have jobs, they don’t necessarily have more discretionary income. Holiday sales were down despite more people shopping. It is unclear whether that’s because they are more likely to save than spend since the Great Recession (The Second Great Depression) or because they don’t have much discretionary income. Increased wages would benefit in either case, and increased consumer spending would increase the Fed has in raising interest rates. 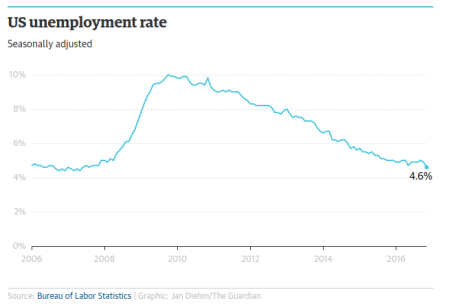 “US Jobs Report” – The Guardian

One thought on “US Jobs Report November 2016”