Governments invest in themselves through research and development, education, training, and basic infrastructure. The US;

“In 2014, federal investment turned negative for the first time since 2001, meaning that government capital is depreciating or becoming obsolete faster than it is being replaced.” – Quartz

Because of the sequester, reinvesting in America has hit a 45 year low. Returning to pre-Recession levels would take $90B per year, less than some estimates of the taxes due from off-shore assets. That would still only take it back to one-half the level of the mid-eighties, when reinvestment was over 0.5% of GDP. Now, the number is negative. Economically, fiscal policies are devaluing America’s assets, something that is not encouraging economically. 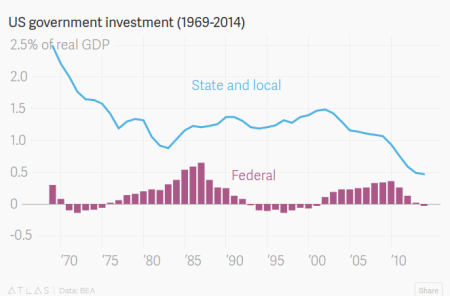