The poor are getting poorer, or are at least having less left over for other bills, because rents are going up. Housing prices are rising, which affects everyone. For most people, the increases have been manageable. That’s not true for the poor. Prior to 2012, housing prices as a fraction of income were understandably higher for the poor because the poor had lower incomes. The poor have always been more likely to rent because they can’t afford down payments or qualify for mortgages. Since the Great Recession, more middle income people are also renting, whether because they can’t qualify for a mortgage or don’t want to be trapped in debt. Demand for rentals increases, which raises prices. Supply also increased somewhat, and some of that supply are houses bought by rental corporations during the housing crisis. The consequence has been a dramatic increase in rent for the poor during the last two years. Instead of rent taking up about 28% of their income, it has jumped to about 47%. With rises in health insurance and child care, more of the poor are having to make the tough choices for basic physiological needs. The trend is troubling. 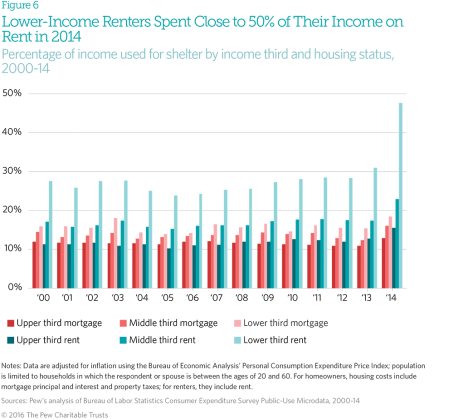