Until recently, there was an effective life expectancy limit. Genetically, there were no biological limits that prevented people from living about 89 years. Realistically, it rarely happened because life was brutal and short because of injuries and illnesses. Within the last few decades, however, we’ve freed the limit of 89 years. The greatest improvements have probably come from advances like organ replacement. Prior to that, any improvement of health ran into a precipice at 89 years. Now, the limit is apparently approximately 97 years. This fundamental change in life span was theorized, but is now proven, and suggests that advancements will continue. Society and governments already have issues with people living far past 65 years old. Instead of retirement lasting a decade or so, if a person could live another century or so, then many of our institutions, rituals, an conventions will have to change, too. 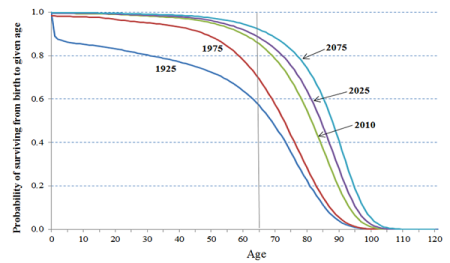