One way to track the world economy is to watch what happens with transportation. The price to ship stuff is hitting record lows. Partly it’s because too many ships, and too many large ships, were built. Partly it’s because global trade is slowing, particularly as China’s economy slows. Just like with oil, an imbalance between supply and demand has driven down prices, which also then impacts the companies operating the ships. Decreased trade, increased financial difficulties, and a leading indicator of the world economy seemingly indicates a downturn. Bigger, more efficient ships are a rational response to competition within the industry, but that logic only applies if the demand grows accordingly. We may have built too many ships, at least until the economy recovers. 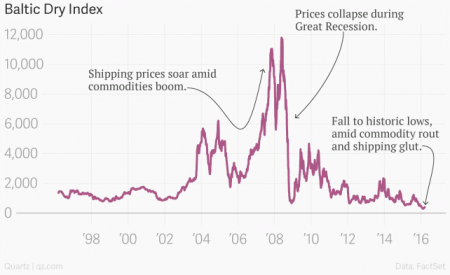 “The World Has Too Many Ships” – Quartz