Income inequality in the US is great enough that 1% of the population makes ~18% of the total US income. It has been higher – before and during The Great Depression. While there is more call to rectify the situation, there are surprising political niches that aren’t participating. One generalized example: The elderly receive the highest benefits from government programs, and any redistribution may upset that. The elderly also tend to be more politically active, which means a major advocacy block is unengaged. Many people have adapted to the new norm and are unaware that there is an inequality, or don’t expect inequalities to be redistributed because they’ve never witnessed it. 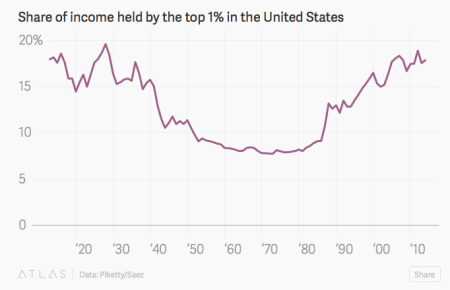 “Inequality Is Skyrocketing In The US” – Quartz