China is key to many economies. By some measures, it is already bigger than the US. Because of China’s size and growth, it is easy for any country to have China as a major importer or exporter. Countries with lots of raw materials (Brazil, US) are slowed when China slows production. Countries that export lots of consumer products (Germany, Japan) are slowed when Chinese consumers consume less. Imports and exports shifting are complicated enough, but currencies are also shifting. Globalization creates complexities that are difficult to untangle; but in general, if China slows or shifts, there’s usually at least one aspect of a country’s economy that suffers. Brazilian iron ore revenues fell 60%, while its inflation has risen to almost 10%. Meanwhile, the US is experiencing deflationary pressures as China makes its exports cheaper, just when the US Fed would prefer some inflation. News reports debate the impact, but there is no one answer because the world is to diverse. One insight is clear, the era of sustained and high GDP growth in China is over and the rest of the world must adjust. 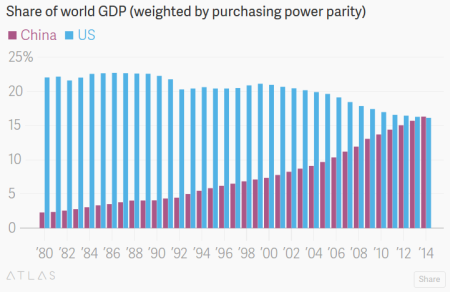 “China Has Officially Ruined Everything For Everybody” – Quartz