Every week has added to last month’s record US unemployment. Some recent weeks have singly been ten times the previous record (6.9 million versus 695,000.) The total US unemployment has reached 30 million during the Corona Crisis. The worst week was early in April, yet each week continues to by in the millions rather than the hundreds of thousands. The weekly total may subside simply because the more tenuous jobs are already lost. Eventually, more stable jobs will remain as a foundation on which the economy builds. If the stimulus plans are effective creating jobs, hopefully a significant number of people will be re-employed. If the stimulus plans are directed to stabilizing company finances, the effect will be indirect at best. As StayHome restrictions are listed, some businesses will recover regardless of government assistance and influence. In the meantime, 30 million people in the US lost their jobs. Total US population = 328 million, ~9% of the US population. Total working US population = 156 million, 19% of the US working population is unemployed. 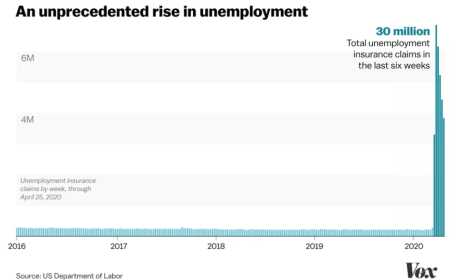 “30 Million Americans Have Lost Their Jobs In 6 Weeks” – Vox

One thought on “Record US Unemployment May 1 2020”