No data, this time, but there is something to consider about the future of the United States that has been inspired by the corona virus crisis.

The actions of three separate sets of states are demonstrating a lack of leadership from the United States government, and inspiring regional states to at least partially unite.

“The development has even raised fears – or hopes – that the federal government’s grip on America’s states will be loosened, perhaps threatening the union itself.” – The Guardian

Three groups of states, loosely the west coast, northeast, and upper midwest are working within their groups to coordinate information, resources, and communications. Each of the three has different levels of formality. Each has different focuses based on demographics, economics, and logistics. Ironically, some southeastern states are also coordinating, though in their case it is to emphasize lesser rather than greater restrictions.

This blog tends towards news that is significant, based on data and logic, and attempts to be apolitical (though that’s subjective so there will always be some debate about that.) Any dissolution of the United States would be globally significant and trigger decades of news based on logic and data; hence, it is appropriate to at least document such an event. 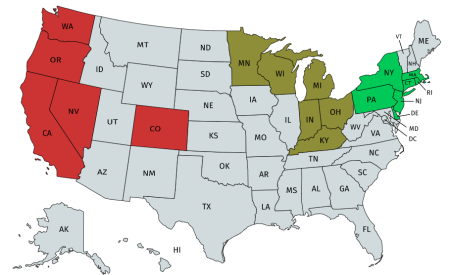 2 thoughts on “States Uniting And Not”