There’s ‘Pretending Not To Panic’ about something that might happen, and then there’s ‘Pretending Not To Panic’ in the midst of a disaster. Last month’s post (Practice Pandemic) included a graphic showing ~33,000 cases of Coronavirus. One month later, the estimate is 336,000; ten times higher – and spreading. At times like these ideologies can try to continue, but they can also be shoved aside by pragmatism. The list of things that might happen is effectively every aspect of life. Deaths are the most prominent. Following those are impacts to the economy, and shifting social norms. Even something as simple as a hug in a movie can seem uncomfortable to some, just like watching black and white movies that emphasized racism, sexism, or even curls of cigarette smoke. Some impacts are positive by hard to measure, an increase in acts of compassion as well as exposure to proudful ignorance. The title of that earlier post remains, however. As one health researcher pointed out, this isn’t The Big One that some members of the medical profession are worried about. History has proved that far worse is possible. Maybe after this we’ll be better prepared. 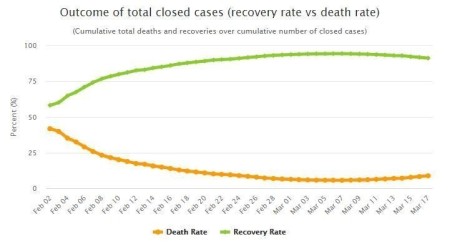