As silly as it sounds, there’s a shortage of sand. Urbanization and infrastructure rely on concrete which relies on sand which wouldn’t seem like a problem when looking at desert dunes. Sadly, concrete is picky. Desert sands are smooth, too smooth to stick properly for sufficiently strong structures. River and coastal sands are better, which is why sand is being shipped from Australia to Dubai. It also means that places like China that are growing rapidly are harvesting so much sand that river deltas and shorelines are losing their natural protections. Singapore alone is credited with consuming 24 entire Indonesian islands.

“Estimates suggest that between 32 and 50 billion tonnes of aggregate (sand and gravel) are extracted from the Earth each year, according to a report from the WWF, making it the most mined material in the world.” – World Economic Forum

While urbanization creates the greatest demand, it is really population growth that is demanding places to live. Shifting to other, more natural sources solves the sand problem, but the shift must also be managed to not create other shortages. One solution that is already begun is to grind up old concrete and use it as a replacement for sand. In the meantime, environmental protections in the form of beaches are literally being scooped up to create environmental protections in the form of walls, leaving large environments unprotected. 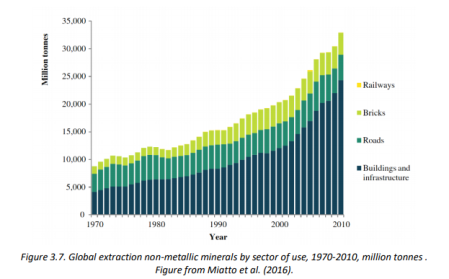 One thought on “Sand Shortage”