Both car crashes and opioid overdoses killed over 40,000 Americans in 2017 (40,231 from opioids and 43,036 from cars). (Note: That’s also similar to the number of gun deaths; “Death by guns in America hit a new record of 39,773 in 2017.”) Those three causes of death effectively target specific populations. Opioids affect people seeking pain relief or a mood-altering escape. Car crashes affect people who regularly commute, though alcohol and distracted driving are also primary causes. Gun deaths are dominated by suicides. Unfortunately, the opioid crisis continues to worsen as discussion is more common than action. Fortunately, car accident rates are expected to drop dramatically as autonomous vehicles, though not perfect, have a much better driving record than human drivers. As for gun deaths, that debate continues with too little progress. So, technology may be improving one of the causes of death. The other two require more societal and cultural shifts, which will probably take much longer. 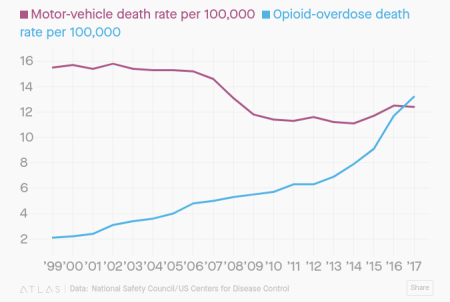 One thought on “Opioids Worse Than Car Crashes”