While many economists and financiers worry about a quarter of a percentage point raise in inflation in most developed countries, Venezuela is a reminder of how extreme inflation can become. By the end of 2019, Venezuela’s inflation is expected to reach 1,000,000%. Zimbabwe had a similar situation that saw prices double every 25 hours. It is easy to become complacent and to expect that stable economies will remain stable and that drastic economic policy shifts only create drama without lasting impact. Venezuela is an example that, even in countries rich in resources, poor governance can cause atypical recessions (three years of double-digit GDP decline), mass migrations (more than 870,000 Venezuelans living in Colombia), and an exodus from a country’s currency (hello, Bitcoin.) Change is inevitable, and yet, even such extreme situations take years to resolve. Governments, even massive dysfunctional ones, have amazing persistence and momentum. Individual lives, however, are affected daily throughout the crisis. 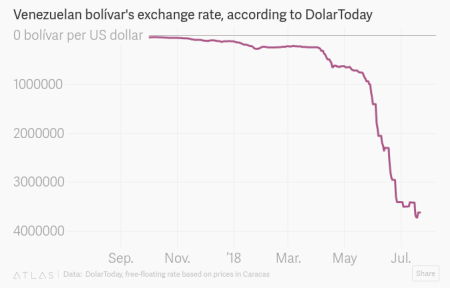 One thought on “One Million Percent Inflation”