As with many things, it seems obvious in retrospect. Warmer land is creating craters in the arctic. (Siberian Craters Proliferate) The same thing is happening as oceans warm, and is much more worrisome. Make methane cold enough and put under enough pressure and it becomes methane ice. Warm it up and turn that ice to a gas and it expands about 169 times. A recent survey of the Barents Sea found hundreds of craters, some of which are a half-mile across. In the short term, methane is about 80 times stronger as greenhouse gas than carbon dioxide. As sea ice retreats and oceans warm, the methane is released, accelerating climate change. This is another effect that must be evaluated to determine if we’ve already reached a point of no return. A curious side effect would be the impact of a rising bubble reaching the surface as a ship passes. No such reports exist, but it conjures an image. 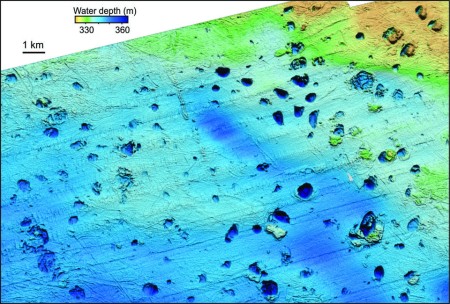 “Hundreds Of Huge Craters Discovered In The Arctic Ocean” – The Atlantic