Since 2000, incomes are up 35% but rents are up 65%. As a guideline, housing is considered affordable when it costs less than 30% of monthly income. The number of people paying more than that has risen 37% since 2001. About 25% of American renters are now paying more than 50% of their monthly income as rent. Guidelines are arbitrary. Evictions aren’t. The number of evictions in America has reached 2.7 million, and is probably higher due to incomplete reporting. The main issue with housing has been the lack of construction of affordable housing. That may be because it is more profitable to make more expensive homes. In some cities, 80% of the new apartments are listed as “luxury”. Building condos is also more profitable than building apartments. As a single issue, housing is enough of a worry. Coupled with low wage growth, increased health care costs, education costs, and day care costs, it is becoming increasingly difficult for young families to progress financially. 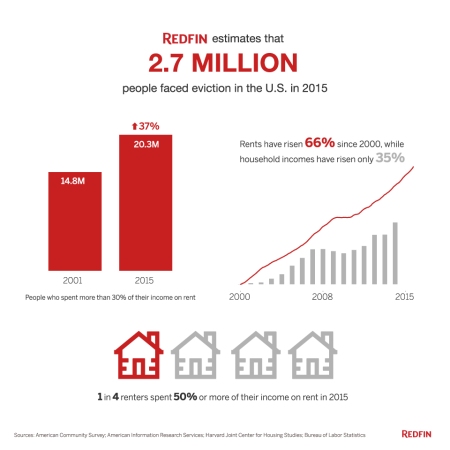 One thought on “Rents Rise Faster Than Wages”