The idea of every generation doing better than the previous generations has gone away, at least for a while. In 1950, more than 78% of the younger generation did better than their parents. In the 60s, it was about 60%. That’s now down to half. It is a basic assumption within the American Dream, but it is being undermined by wealth inequality. The wealthy are able to invest in their childrens’ education or help them set up businesses, which is good. Previous generations, however, relied on middle income jobs and steady raises. As wealth has accumulated, and as the middle class has diminished, that other old phrase is repeated, “The rich get richer and the poor get poorer.” Because not every young rich kid gets the benefits, and because the lower class is now about half the population, the majority of young people are making less than their parents did at the same age. Current regulations, legislation, and conventional wisdom doesn’t reflect that reality creating a disconnect within expectations and support systems. While wars may explain some of the trend; 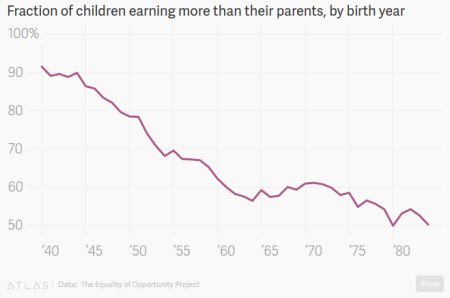 One thought on “Younger Generations Poorer”