This Presidential election year broke a trend. In the past during an election year, there was growing confidence in the (ad hoc) two party system. Between the elections, the demand for a third party would rise to about 60%. This election year, the demand for a third party has remained high at 57%. As the election approaches, only 37% of Americans think the two parties are doing a good enough job. The recent polls, however, suggest Americans don’t think the existing third party candidates are the answer either; otherwise they’d be polling much higher. While the dissatisfaction may not elect a someone from outside the Democratic or Republican parties, there may be enough votes to disrupt the conventional electoral process. A trend to watch may be the growing percentage of voters who actually vote for candidates outside the Democratic or Republican parties. In previous years, such votes accounted for 2% of the total. This year, they are polling at 10% of the total. If they were to poll at even greater numbers next time, there may be a fundamental shift in American politics that is greater than any shift since the Republicans and Democrats displaced their predecessors. 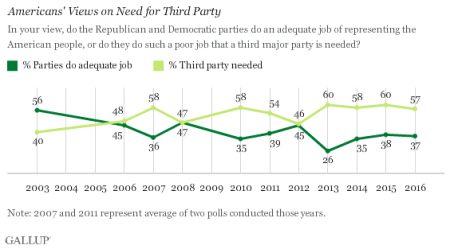 One thought on “US Third Political Party Demand”