{sarcasm begins} Whew. Isn’t it great that we learned our lessons because of the Great Recession? No more ridiculous debt and even governments living within their means? {sarcasm ends}

Since 2007, the total debt of the world’s governments has doubled. In 2007 just before The Great Recession (The Second Great Depression), governments owed $29.2 trillion. Now, they own $59.1 trillion.

“Add in household, corporate and bank debt and the grand total was a mind-boggling $199 trillion in mid-2014, up 40% since 2007, according to a study last year by McKinsey Global Institute.”

Two solutions are being discussed, each of which are considered dramatic. 1) Print more money to get the economies going. That’s been tried frequently, is at least familiar, but could trigger hyper-inflation. 2) Debt jubilees were common centuries ago. When economies became too complicated or had too much debt, governments could declare a jubilee, a cancellation of everyone’s debt – which was highly popular unless you were a lender. Assets are accumulating rather than circulating, further slowing economies and recoveries, and increasing inequalities, and inspiring the negative interest rates being issued by banks. There seems to be no simple, equitable, and appealing solution, which means something unsettling is probably about to happen on purpose or by consequence. 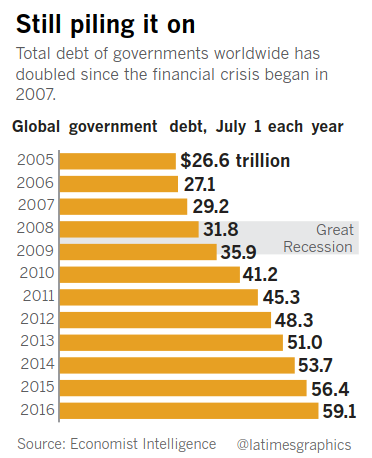 One thought on “Government Debt Doubles Since 2007”