If you’re an American and you think the economic system is rigged, you are not alone. 71% of Americans believe the economy is rigged to benefit the rich. The belief or the reality has led to people lowering their expectations. Some feel that hard work still works, but requires more than before; which is still an admission of an increasingly more difficult situation. Others are accepting or setting as a goal a measure of financial stability, being relieved if their situation is not deteriorating. This is true for a majority of most major ethnic and political groups of Americans. In a true democracy, the majority opinion should matter, and may. 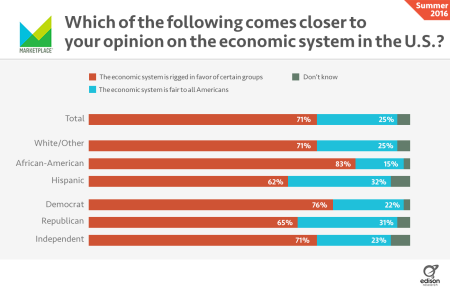 “Why Americans Feel The Economy Is Rigged” – Marketplace

One thought on “Americans Believe America Is Rigged”