Two sets of news stories seemingly conflict, but they are both correct. There are far fewer people in extreme poverty. Approximately 600 million people have risen out of extreme poverty.

At the same time, wealth continues to concentrate.

If everyone was getting equally richer, there’d be a greater reason to celebrate; but the difference points out how large of an effect a small improvement can make, while the total increase in wealth simultaneously is sent to tax havens and effectively removed from the economy.

“Since 2000, the poorest half of the world’s population has received just 1% of the total increase in global wealth, while 50% of that has gone to the 1% of people on the top of the pile ” – Conversation US

News items from both sides can sound contradictory, but they are merely the two sides of our modern paradox. Poverty is so extreme that even a few extra billion dollars improves the lives of millions. Wealth is so extreme that while the richest 62 gained $542B, the people in the middle lost $1T. Instead of a rising tide lifting all boats, some are happily surfing giant waves, others are sinking, and many are simply glad to have a bit more water flow by. 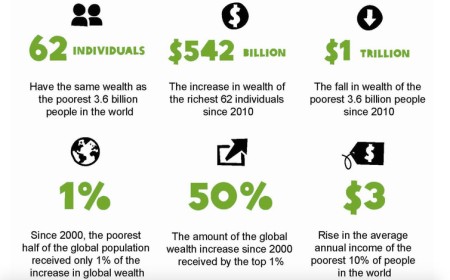