Fishing feeds billions, and as urbanization, pollution, and climate shifts impact farms on land more people rely on food from the sea. The sea, however, is not infinite and overfishing is a major concern. Much of the data describing fish harvests was from official sources, which did show a growth and then a reduction in catch size. Researchers trying to learn more dug deeper and found that unofficial fishing and under-reporting hid much higher catch rates and a subsequently sharper fall in harvests.

“The FAO data indicated a catch of 86m tonnes in 1996, then a decline of 0.4m tonnes per year. In contrast, the new research estimates the peak catch was 130m tonnes, but declined at 1.2m tonnes per year afterwards.” – Guardian

The bad news: if fishing isn’t sustainable, then a major food source is at risk.

The good news: the oceans can support much larger populations than expected, many of the fishing sources are sustainable, and proper management may preserve a resource that is more valuable and productive than expected. 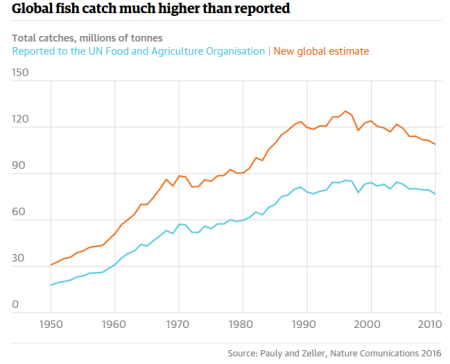 One thought on “Overfishing Underpredicted”