Being homeless in America is now more likely to happen after decades of work. Decades ago, homeless was more likely to be temporary and happen to the young. Eventually, hard work and a bit of luck would succeed; and young people were resilient enough to survive the experience. Now, older Americans who’ve lost income because they lost a job, or have lost a house because their medical bills were too expensive are now becoming homeless. Becoming homeless when older exacerbates health issues, which also exacerbates finding a job. The situation becomes more threatening as vulnerabilities compound. In the two year study referenced in the report, 14 of 350 participants died – a high attrition rate. 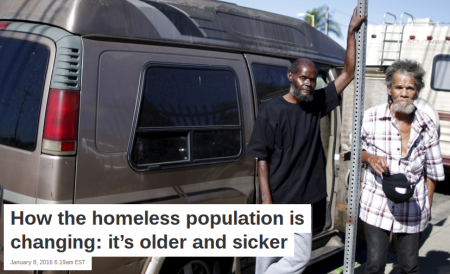 “How The Homeless Population Is Changing” – The Conversation US

3 thoughts on “The Elderly Homeless”