Unemployment is spiking. Personal financing is being challenged. Looking at the stock market it is easy to assume that corporations are doing relatively well. The reality is bad enough to be yet another major threat to the world’s economy. Five companies account for ~1/5 of the S&P 500’s value:

Those five companies are not the economy, despite the media’s tendency to report on “the market” as if it was everything.

“40% of all US corporate debt was rated BBB, just above junk, going into the crisis” – World Economic Forum

That was 40% before the crisis. That number is expected to go higher as the crisis continues. While many will cheer the collapse of corporations, the impact on financial institutions may impact more jobs, as well as interest rates for personal finance issues like mortgage and credit card rates. Again, even before the coronacrisis, US corporate debt has been rising faster than US GDP, debt reaching about 75% of GDP. That debt was already above its peak at the start of the Great Recession. Our fight against the virus isn’t over. After our restrictions are lifted, we will continue to have issues to deal with that may not be resolved in weeks or months. 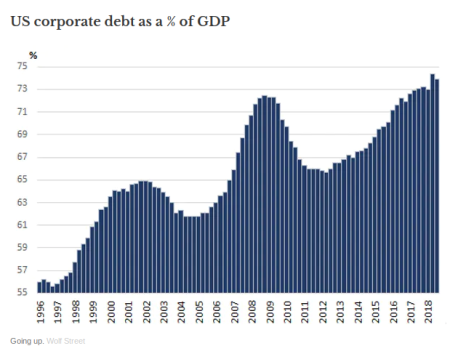 “Coronavirus: The Economic Recovery Won’t Only Be U-shaped – It’ll Look Like A Wheelbarrow” – World Economic Forum

One thought on “Preparing For Corporate Defaults”