The bad news: Earth’s protective magnetic field can flip so north is south, south is north. That’s bad for protecting us and our technology from solar storms. Pity the animals that rely on the magnetic field for navigating while migrating.

The worse news: The flip isn’t as simple as north versus south. When the poles flip they can reset somewhere else.

The good news: The flips have finally been quantified to take thousands of years. We might be in the midst of one now, but it is happening slowly enough that it just looks like a little bit of drift.

The surprisingly bad news: Occasionally, the flips happen much more quickly, as in under a century.

Discovering the existence of pole flips was recent. We didn’t know how fast or frequent they were. Now we know. They occur every few thousand years. Slow shifts provide time for adaptation. Fast shifts happen quicker than evolution, threatening species. Uncovering the specifics like whether there are spurts and surges in the shifts isn’t as likely with current techniques. But we at least now know that this is worth study and possible preparation. Fortunately, the preparation is similar to what is needed to protect against massive solar storms, something that needs additional work. Now we have additional motivation. 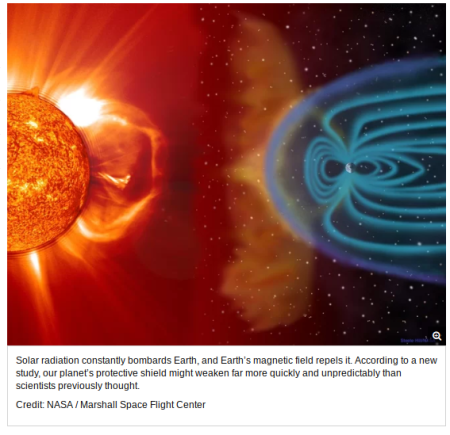