Check back through some of this blog’s recent posts and find that the US had record unemployment of 3.2 million in March, 6.6 million in April, and in May went from 30 million to 42 million.

“The Bureau of Labor Statistics is currently reassessing its measurements and Morgan Stanley economists warned this week that the “shadow” unemployment rate – which includes people not currently picked up by the official government figure – may be 25%.” – The Guardian

One analysis suggests that 40% of the jobs lost won’t return. Companies may go out of business, or labor may be replaced with automation. History suggests that this may be just the first wave. It was doubtful but possible that this time we’d keep the second wave from being as overwhelming as it was a hundred years ago in the mis-named Spanish Flu. But, protesters demanding re-opening based on emotion rather than data, and social unrest inspiring people to march may enable a second wave, subsequently delaying a return to “normal.” Compounding causes raise the caution that an economic recovery is far enough away to effectively be out of sight. These crises may be temporary, but they are also the new normal, for now. 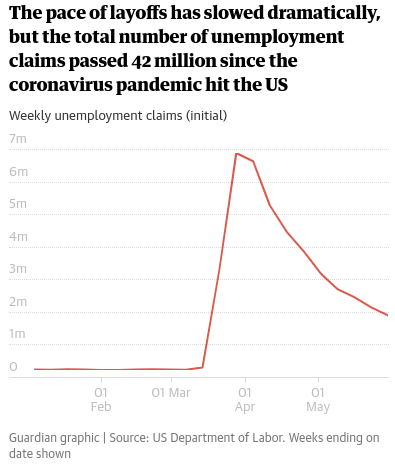 One thought on “Record US Unemployment June 4 2020”